11th Course on the BBB in CNS Drug Development Online

The course is a coproduction of In Focus and Udenaes Consulting: Margareta Hammarlund-Udenaes is Professor in Pharmacokinetics and Pharmacodynamics (PKPD) at Uppsala University and a former Dean of the Faculty of Pharmacy in Uppsala. Her research is focused at studying PK aspects of BBB transport of drugs in relation to CNS effects, which has led to the development of new concepts within the BBB transport area, focusing on unbound drug relationships. The concepts make it possible to study the BBB contribution to drug transport to the CNS. A method frequently used is microdialysis, but also PET and other techniques are utilized. Her research group has optimized in vitro methods for more rapid screening of BBB transport properties in drug discovery (Combinatory Mapping Approach). They also study nanodelivery to the brain. Dr Hammarlund-Udenaes has been an Associate Editor of Pharmaceutical Research and a member of the Editorial Advisory Board (EAB) of the Journal of Pharmaceutical Sciences. She is presently on the EAB of Fluids and Barriers of the Central Nervous System (FBCNS) and Pharmaceutics. She became an AAPS Fellow in 2005 and is a frequent lecturer at conferences and in drug industry within the BBB transport – pharmacokinetics area. She co-founded and has co-chaired several of the International Symposia on Microdialysis in Drug Research and Development together with Dr de Lange, and was the Chair of the Gordon Conference on Barriers of the CNS in 2014. Her company Udenaes Consulting (udenaesconsulting@gmail.com) gives advice to drug industry in PKPD and BBB transport issues.

Elizabeth de Lange, PhD,  is Professor of Predictive Pharmacology at the Division of Systems Biomedicine and Pharmacology of the Leiden Academic Centre for Drug Research (LACDR).
She focusses on the development of mathematical models that predict PKPD relationships in human, in health and disease. This involves identification and characterization of key factors as well as their interdependencies, with the focus on the CNS. To that end she uses highly advanced and strategic in vivo preclinical experiments, analysis of compounds in small samples, and mathematical modelling and simulation. This research has a comparative and integrative design to elucidate conditional influences of individual factors to the whole (Mastermind Research Approach), which is crucial for translation between species and conditions. A recent success is the development of a rat and human physiologically-based CNS PK model. This model is able to adequately predict drug distribution into and within multiple compartments of the CNS. She co-founded and has co-chaired several of the International Symposia on Microdialysis in Drug Research and Development together with Dr Hammarlund-Udenaes, and organized many other scientific events among them the 2014 Annual Meeting of the AAPS. She is an AAPS Fellow since 2013, and a frequently invited lecturer. She is on the EAB of several journals, including Pharm Res and FBCNS. In Jan 2020, she received an Honorary doctorate in Pharmacy from Uppsala University, and in Oct 2020 she received the Lewis Sheiner lecture award from ISoP. Her company In Focus provides courses, training and gives advice on (physiology-based) pharmacokinetics (PBPK), BBB transport, (CNS) target site distribution, binding kinetics and effects (PKPD) (info@infocus-ecmdelange.nl). 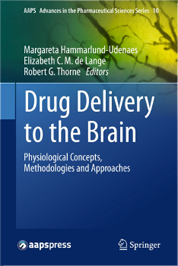